The festive season is on the track and its time to munch on loads and loads of desserts. Ganesha Chaturthi celebrations can never be complete without modaks. Lord Ganesha loves these steamed sweet little dumplings with a drizzle of pure ghee on the top. Modaks are authentic maharashtrian sweet and specially consumed during Ganesh Chaturthi. Ganpati Bappa was fond of sweets and modaks were his favorites. This made him Modakpriya. Every year during Ganesh sthapana, I make modaks of different flavors as bhog and serve them as Prasad. Modaks are either steamed or fried but the traditional authentic modaks are made up of rice flour and are steamed till firm and filled with coconut and jaggery.

The story behind Ganeshas love for Modak

Lord Shiva went on a visit to Anusuya in her forest. She offered them meal and he was seated next to young Ganpati. Lord Shiva was very hungry and wanted to have food immediately but Anusuya told him that he will only be served once Bal Ganesha’s hunger had been satiated. Lord Shiva controlled his ire and waited while Ganesha was having a variety of food items. Ganpati happily ate all that was served to him but his hunger was insatiable. Even goddess Parvati was surprised to see her young son’s insatiable hunger.

This made Anusuya realized that Lord Shiva would remain hungry due to Ganpati’s hunger so she offered him a single piece of sweetened food. Upon having this, Ganesha gave a loud burp and his stomach was finally full. Lord Ganesha’s burp was accompanied by Lord Shiva’s not one but 21 burps! They both said that they had enough and did not want to eat more.

Seeing this, Goddess Parvati got curious to know what the sweetened food was that Anusuya had served Bal Ganesha. On learning that it was a modak, she expressed her wish that devotees of Lord Ganpati should always offer modaks to him and this wish has been granted since years and generations.

A quick look at the recipe

1. Add coconut and jaggery in a heated pan.
2. Keep stirring around five minutes. Add nutmeg and saffron and mix well.
3. Let it cook for another five minutes and keep aside.
4. Boil water with ghee in a deep dish. Add flour and mix well.
5. Now cover the dish and cook till its half done.
6. Put some ghee on the base of a steel bowl and knead the dough.
7. Take some dough and roll it in a ball. Flatten it and fill it with the coconut jaggery mixture.
8. Now shape it with the help of modak mould and seal it tight.
9. Put the dumplings in a muslin cloth and steam them for 15 minutes.
10. Drizzle them with a spoonful of ghee and serve.

This recipe is the simplest way to make lip smacking modaks. Try it with a twist of chocolate filling or dry filling and enjoy!! 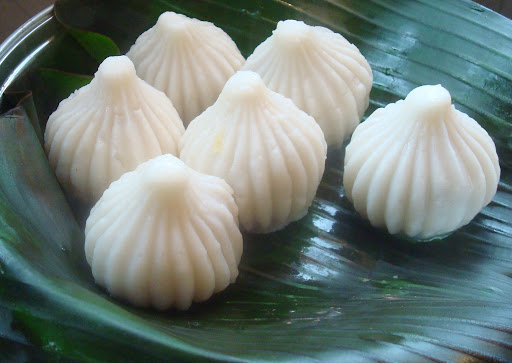 Recipes to try this rakshabandhan

5 Easy Breakfast Recipes That Are A Favorite With Kids